Learning Objectives:
1. Recognize the features of a stable system
2. Differentiate common cause from special cause variation

David Robert Jones, a.k.a. David Bowie (c.1947-2016), and William Edwards Deming (c.1900-1993) had overlapping lifespans although it is likely that they did not know each other. The pop icon and the champion of statistical process control shared fame, though, for their association with “Changes” – one created a rock anthem to musical reinvention and the frequently changing world; the other dedicated a career to studying systems and understanding variation. The latter is our focus for this edition of QI/PS Hot Topic.
As described in the Model for Improvement (QS/PI Hot Topic, December, 2019), measurement is the answer to the question, “How will we know that a change is an improvement?” Yet, measurement is not helpful if we do not interpret measurement correctly through application of appropriate statistical rules. Frequently in Quality Improvement, we engage in a project and measure parameters of change over time during our PDSA cycles. It is not uncommon for teams to see early data trends and declare success or failure after a limited number of data points. Pre-conceived biases about the predicted effects of interventions may color the interpretation of results.
Every stable system, whether it is the production line at Toyota or the operating room at Maine Medical Center, has a central tendency (median or mean). And every stable system has data points that fluctuate around the central tendency. Such variation is predictable and is known as “Common Cause” variation (Figure 1) – the response to the normal variables that affect the system every day. For example, it is known that the operating room case volume will increase in the middle of each week due to the elective surgery scheduling tendencies of the surgeons and their support staffs. Conversely, the number of cases runs below the daily average on weekends due a paucity of elective cases. On balance, though, the average number of cases is predictable from week to week. But what if a sudden event perturbs the stable system? Think of the early impacts of the Covid-19 pandemic – elective surgeries were cancelled for a prolonged period and the average number of surgical cases dropped precipitously. This is known as “Special Cause” variation (Figure 2). 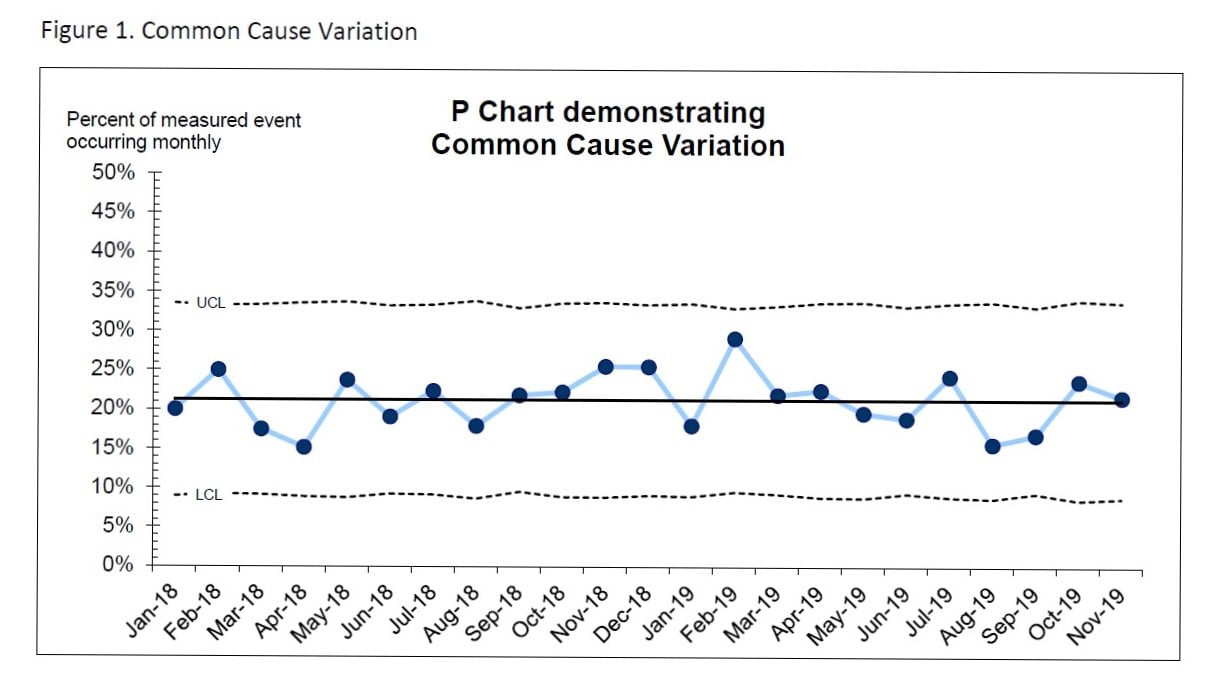 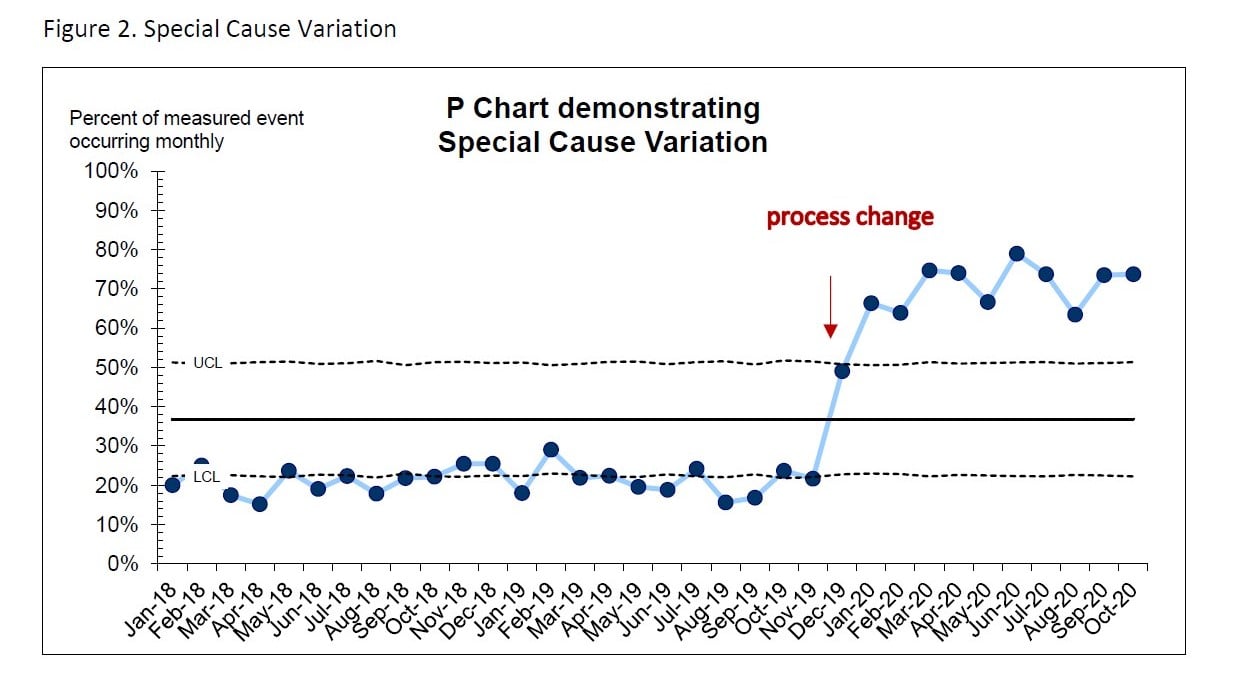 Most clinicians and data scientists are facile with traditional descriptive statistics and the concept of statistical significance – the mathematical likelihood that an outcome did not occur by chance alone. The same type of rigor in data interpretation is required in quality improvement. In quality improvement, however, we apply techniques known as statistical process control (SPC). In both forms of statistics, mathematical rules govern the identification of meaningful process or outcome changes. In QI, we use these rules to discern common cause variation from special cause variation.
Special cause variation is neither good nor bad inherently. It depends on the context. The drop in surgical cases due to Covid-19 was not desirable and the special cause was an external and unanticipated factor. However, the return of case volume to previous averages was desirable and was the result of a specific intervention by hospital leadership and surgical services – a deliberate decision to reintroduce elective cases when circumstances were safe to do so. This special cause was attributable to a planned intervention.
In a later editions of Hot Topic, my colleague, Dr. Alan Picarillo, will discuss the traditional methodologies for graphing small time dependent data sets (run charts: usually < 20-30 points) and larger data sets (statistical process control; ≥ 20-30 points). Statistical rules govern the discrimination of common cause variation from special cause variation on run charts or statistical process control charts (figure 3). As the number of data points accumulate, there is more confidence in the statistical result.
Figure 3. API Rules for Detecting Special Cause in statistical process control (ref.2) 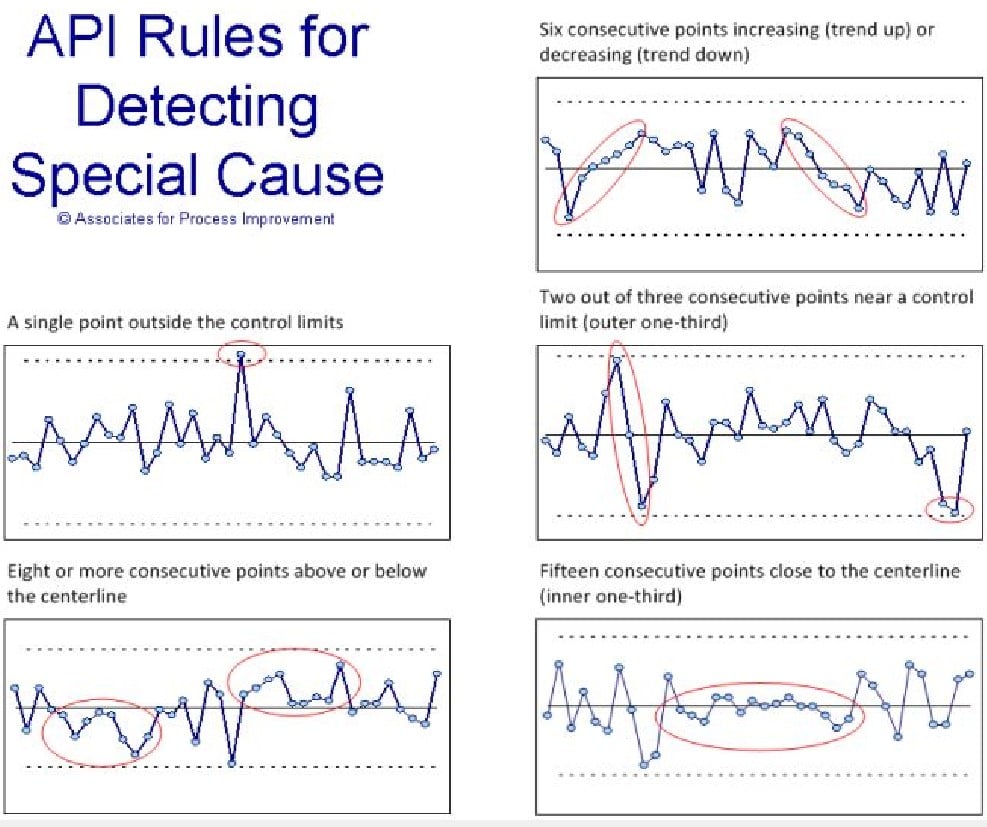 Practitioners of quality improvement must be familiar with the concept of common cause and special cause variation, along with the statistical rules that help discriminate important variation. The risk for improvement teams is misinterpretation of data trends and the effects of interventions over time – cardinal mistakes to the eminent engineer and scholar who studied systems. W. Edwards Deming probably would have been puzzled by, and perhaps disagreed with the lyric, “Time may change me, but I can’t trace time.” Time is, after all, the independent variable of every system process. Nevertheless, he might have appreciated a hit record that titled his life’s work.